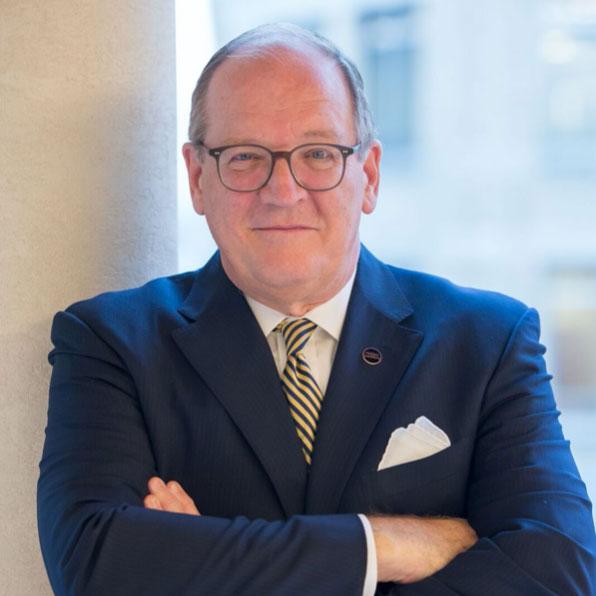 Ambassador Polt assumed his position as ASU Ambassador-in-Residence in The College's Leadership, Diplomacy and National Security Lab on October 1, 2020.  Prior to that he had served as Senior Director at the University's McCain Institute for International Leadership after concluding his 35-year diplomatic career in 2012.  The Ambassador held assignments as U.S. Ambassador to the Republic of Estonia and to Serbia and Montenegro. Prior to his ambassadorial missions, Ambassador Polt was Principal Deputy and Acting Assistant Secretary of State for Legislative Affairs in the Powell and Clinton State Departments. During his three decades as a career diplomat, Ambassador Polt served as U.S. Minister and Deputy Chief of Mission of the U.S. Embassy in Berlin, Germany and Deputy Chief of Mission and Charge’ d’ Affaires of the U.S. Embassy in Bern, Switzerland. He has also served as Senior Advisor to the Director General of the Foreign Service for Management Reform and was a key member of the Senior Management Steering Board directing the State Department’s 2003-2005 multi-million dollar reinvention of its Diplomatic Communications System. Ambassador Polt has held other senior positions in the Department of State, as Deputy Director for European Security and Arms Control issues, and in Panama City as Political Counselor of the U.S. Embassy during the time leading up to the U.S. military action against the Noriega regime in 1989. During his earlier career, Ambassador Polt was assigned to Embassies in Bonn, Mexico City, and Copenhagen, as well as the U.S. Consulate in Bremen, Germany. The Ambassador has been the repeated recipient of the Presidential Meritorious Service Award and numerous Department of State Meritorious and Superior Honor Awards for Outstanding Policy Leadership, Management, Crisis Performance, and Political Analysis. He has been awarded the Thomas Jefferson Award for Service to U.S. Citizens Overseas by American Citizens Abroad.

Ambassador Polt was born in Austria. He holds a bachelor’s degree and an honorary doctorate from American International College in Springfield, Mass., and a master’s degree in public administration from the University of Tennessee. He and his wife Hallie live in suburban northern Virginia. They have two grown children, Nicholas and Lindsay. The Polts enjoy sailing and skiing for relaxation and a good cup of coffee with time to savor it.

Interviews
LSM.LV: What promise does the Biden presidency hold for the Baltic states?
Devils in the Details: Ask an Ambassador
American Diplomat Podcast - Assimilation